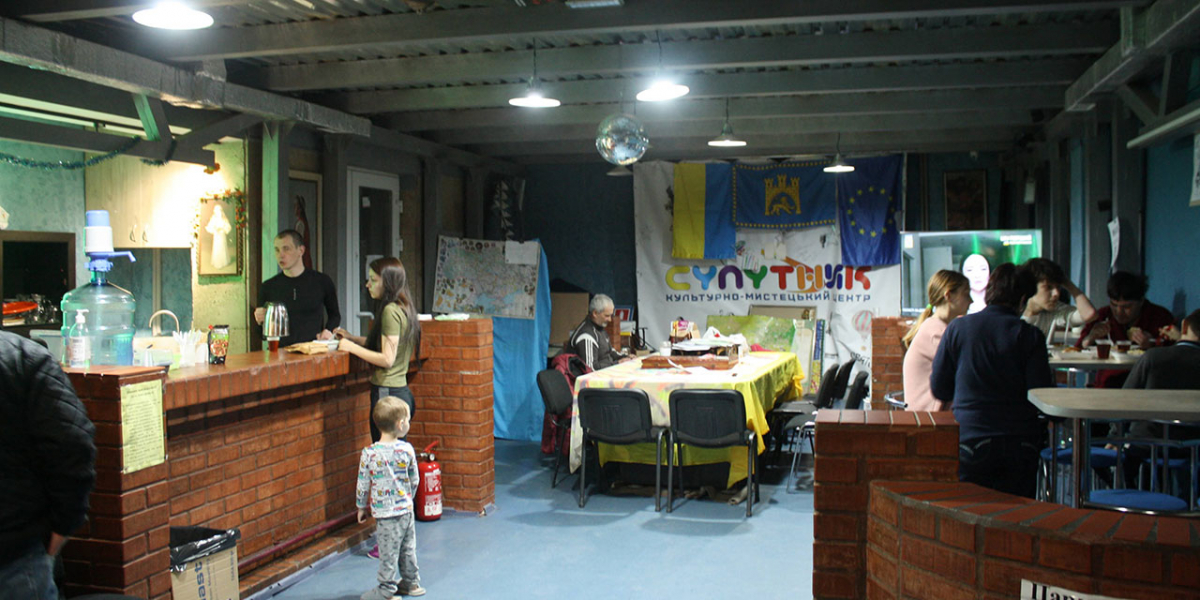 It’s a huge, hangar-like building, disused and decrepit, on the outskirts of Lviv. But for Mykola Piddubnyi and his colleague Irina Gavrilova, the local entrepreneur’s gift was a godsend, allowing them to move their expanding wartime supply operation out of Gavrilova’s tiny apartment. The day I visited, there were dozens of wooden pallets spread out across the big space: one cluster—maybe 40 cardboard boxes—for baked goods, another for large plastic buckets filled with dumplings, still other areas for canned food and toiletries, even a pallet piled high with crutches and wheelchairs.

But Gavrilova guided us past all that to the area that meant most to her, with the boxes she and a team of friends and relatives pack every day for soldiers serving on the front lines. Unlike the other boxes in the warehouse, destined mostly for civilians, each of these cartons was an act of love: a hand-picked mix of items to sustain a soldier for a week to ten days. Canned meat, dried soup, pasta, sauerkraut, cookies, cigarettes, even toothpaste and toilet paper: the contents varied from box to box, each packed a little differently, with an unmistakable human touch.

Doesn’t the government provide food for fighters, I asked? “Not always,” said Piddubnyi. “It’s hard to get to remote, rural Donetsk. When I served there in 2015, we drank from puddles and ate frogs.” So this time around, people like Piddubnyi and Gavrilova are helping, doing whatever is necessary to support the war effort.

I visited Lviv in early April, just as the main focus of the war in Ukraine was shifting closer to Russia, from the central Kyiv region to Donbas in the east. Once an important medieval city and later an outpost of the Austro-Hungarian empire, Lviv had hardly been touched by the Russian invasion. Still, even as the fighting raged more than 800 miles to the east, it was clear to a visitor that this was a city at war.

Traffic in and out of the center snarled at military checkpoints. A curfew emptied the streets at 10 P.M. On my first night there, an air-raid siren sent me racing to the basement of my hotel. According to local estimates, hundreds of thousands of what migration experts call “internally displaced persons” (IDPs) had swelled the population of the city by more than 50 percent.

But even more striking, and arguably a more consequential change, was how the overwhelming majority of Lviv residents had put their lives on hold, repurposing whatever they did for work and reorganizing their days to bolster the war effort.

“Most people I know have dropped everything,” said Anna Swanson, a former real estate manager now focused on humanitarian assistance. “They’re using their own time and their own resources to support Ukraine.”

The city’s largest art museum had postponed events and put its paintings into storage, reinventing itself as a giant warehouse for humanitarian supplies. A policy-research nonprofit had suspended its work and converted its elegant townhouse office into a recruitment center for Territorial Defense militia. The city tourist agency was serving as a media hub, supporting foreign journalists arriving to cover the fighting.